Creating an installer is not as straightforward as most people think. This is especially the case for more sophisticated configurations, such as when you need to execute different platform-specific actions at different stages of the installation process. You may need to check a registry value, create a configuration file, execute a particular command, make substitutions in text files or even connect to an external server via a HTTP POST request. BitRock InstallBuilder includes a number of useful built-in actions to facilitate adding complex functionality to your installer. Actions can be accessed by editing the XML project file directly or in the 'Advanced' section of the InstallBuilder GUI.

InstallBuilder actions are organized in what are called action lists, which are executed at specific points of the installation process. It is important to understand how and when each action must be performed, what differences exist between action lists inside components and within the primary installer, how the installer will behave when you run it in different installation modes (GUI, text, or unattended) and what happens when you generate rpm or deb packages. 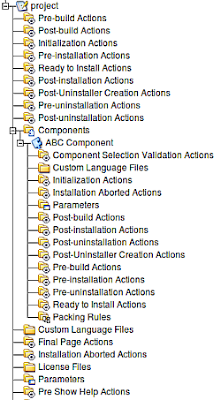 You can place your action lists in the main installer project or in one of its components. Action lists include your actions of choice and are executed at a specific point of the installation process as outlined below.

Order of Execution of Action Lists 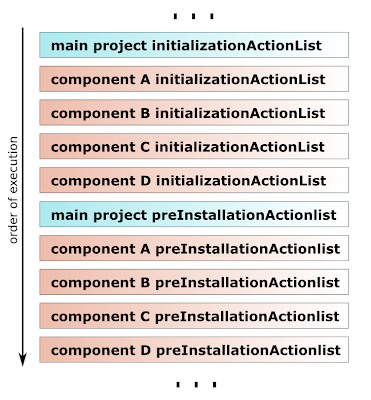 We can divide all action lists into two groups based on what is executed earlier: main project or components action lists:

These are special cases. There is no interaction with the user and the following action lists are not executed: